Thanks to all who supported and attended our 8th Annual Comedy Show & Dinner Dance.
See you in 2023!

The Original Buffalo Soldiers Motorcycle Club was founded in Chicago in 1993 by Mr. Ken 'Dream Maker' Thomas, to socialize men and women who shared similar ideas and common bond of motorcycling.

The Militia Act of July 17, 1862, allowed blacks to serve in the army. After many years of slavery in the United States, President Abraham Lincoln signed the Emancipation Proclamation on January 1, 1863, freeing all slaves. This document allowed the U.S. Army openly to recruit blacks for the 54th and 55th Regiments for the Civil War.

Escaped slaves saw the military as a chance to gain freedom, and free black men saw an opportunity to better their lives. A major inducement for enlistment was the prospect of learning how to read and write, skills taught by the regiments' chaplains. By the end of the Civil War, approximately 180,000 blacks had served In the Union Army. Of these, 33,380 died.

On July 28, 1866, Congress passed legislation allowing black soldiers to serve as peacetime soldiers in the army. The enrollment of blacks in the military, along with the Union's victory in the Civil War, led to the formation of the Ninth Cavalry in New Orleans, under the command of Colonel Edward Hatch. The Tenth Cavalry in Fort Leavenworth, Kansas, was led by Colonel Benjamin Grierson. Hatch and Grierson had problems finding white men to serve as officers. One who turned them down was then - Colonel George Armstrong Custer, who opted to take command of a lower-ranking all-white unit instead of a unit in the 9th Cavalry.

These two regiments performed many special tasks that helped In the development of the western and southwestern regions of the United States, despite facing many conflicts with Indians, neglect from the Army and racism from the very citizens they helped protect.

The Buffalo Soldiers had endless problems finding presentable uniforms, functional weapons, food and other supplies. Perhaps the greatest indignity forced upon them were the pitiful, crippled discarded Civil War  horses that they were assigned. In addition, food provided to the Buffalo Soldiers was often spoiled, thrown from moving trains and damaged to the point that its was no longer fit to eat.

Many citizens exhibited prejudice toward the Buffalo Soldiers, despite their involvement in creating roads, railways, and telegraph lines throughout Texas, New Mexico, Arizona, Kansas and Louisiana. Reporter Berger Copeman says black soldiers were frequently beaten in the streets and thrown out of bar rooms. In another case, a recovering soldier on his way to the hospital reportedly said that he had to go 48 hours without food because service was refused to him on the train and at the train station.

At least two theories exist about the name of these all black regiments.

Some historians believe the Plains Indians gave the soldiers the name "Buffalo Soldiers" because of the similarity in the texture of the buffalo's fur and the soldier's hair. Another theory suggests the soldiers believed that they were given this name because the regiments' fighting spirit made them worthy opponents just like the buffalo. The soldiers accepted the comparison and kept the nickname.

The Indians "saw these soldiers as furious fighters. Some of their survival was based on their eating plants and grazing the land for food and items to use as weapons, just like the buffalo." The soldiers adopted an emblem incorporating the buffalo, wearing it with pride.

In the summer of 1867, the 9th Cavalry Regiment moved to Fort Davis and Fort Stockton, ordered to protect the mail and stage route between San Antonio and El Paso. Soldiers also maintained law and order on the Rio Grande, fighting both Mexican American bandits.

The motto of the 9th Cavalry, "We Can, We Will" reflected their determination. The Buffalo Soldiers opened new roads, mapped new parts of the West and pinpointed water holes, making travel through the area safer. Other duties included searching for cattle thieves, escorting stages, protecting river crossings, and guarding supply wagons, cattle herds, and later the railroads.

For a time, the 10th Regiment was the only military force In west Texas. Exploring much of Texas, they also patrolled Kansas, Oklahoma, New Mexico and Arizona. Copeman says that the Tenth Cavalry was so dedicated that the rate of desertion "steadily declined until it was singled out as the lowest of any regiment in the army."

For over two decades, the 9th and 10th Cavalry Regiments fought Indians on the Western frontier against some of the most famous Indian warriors in history, Including the Apache leaders Victorio, Geronimo and Nana. A primary task was trying to a put a stop to Victorio and his band of  renegade Apaches. Victorio eventually weakened the Ninth Cavalry to the point they were forced to ask for reinforcements from the Tenth Regiment. After many unsuccessful attempts to stop Victorio, the Buffalo Soldiers united to prevent the Apaches' hit-and run strategy of attack. Finally in 1880, Victorio was chased again into Mexico and killed by a Mexican Cavalry unit.

The Buffalo Soldiers also deterred small bands of hostile Indians who constantly attacked during the building of telegraph lines and roads. Among the other tribes Buffalo Soldiers fought against were the Comanche, Ute, Kiowa, Shoshone, Cheyenne, Bannock, Kickapoo, Sioux and Blackfoot. At times the soldiers were outnumbered, but they gave pursuit anyway. On one occasion, a unit of 90 soldiers lost only three men when they were attacked by 700 Cheyenne Indians. The Buffalo Soldiers also pursued Geronimo until he surrendered to General Nelson Miles on September 4, 1886.

The 24th and 25th Infantry Regiments of Buffalo Soldiers were organized in 1869 and transferred to the Southwest to protect the frontier. Historian Marvin Fletcher writes that shortly after their arrival, a small group form the 24th Infantry and the 9th Cavalry was attacked by bandits in Arizona as the soldiers guarded an army payroll wagon. Despite being pinned down with several wounded, the black soldiers' bravery was so "exceptional" that the paymaster sent a letter of praise to his superiors.

In 1877, the Ninth Regiments was asked to move to El Paso and restore peace in the notorious Salt War. They subsequently helped reestablish an old fort that is known today as Fort Bliss.

Lt. Henry O. Flipper, the first black graduate of West Point and Army officer, joined the Tenth Cavalry. He settled in El Paso after he was discharged from the army. Flipper led the way for blacks to become

officers in the Army, including John Hanks Alexander, the second black Army officer, who joined the Ninth Cavalry.

By the end of the 19th century, the black Infantry and cavalry had earned

17 medals for honor. Despite the accomplishments of these soldiers, it was not until President Truman called for equal opportunity within the armed forces that the Army was desegregated.

On July 25, 1992, a bronze statue of mounted Tenth and Ninth Cavalry troopers was unveiled at Fort Leavenworth, Kansas. El Paso recognized the endeavors of the Buffalo Soldiers on July 27, 1992, in a ceremony dedicated to the Buffalo Soldiers who were buried in Fort Bliss National Cemetery. That same day the House of Representatives proclaimed July 28 as "Buffalo Soldier Day." 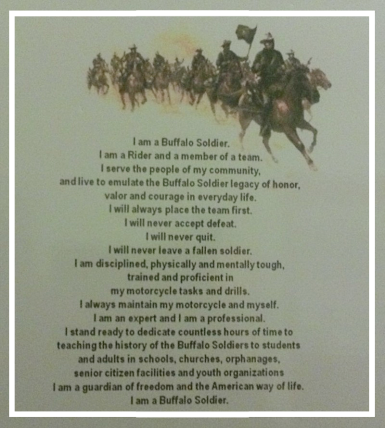